Foreign gang 'extorts $3m in cryptocurrency' from tourists in Thailand

The group of six - composed of a German, a Russian, two Kazakhstani men, and two other foreigners of unclear nationality - had reportedly approached the tourists Evgenii and Ekaterna Abduliin, both 31, at a cafe on Koh Samui in Surat Thani province on September 15.
2022-09-29 17:26:44 Thai doctor, 69, has performed so many sex change operations his patients call him 'daddy'

Dr Thep Vejvisith runs a small clinic in an unglamorous part of Bangkok, Thailand, where he offers gender reassignment procedures for half the price of most other clinics.
2022-09-28 16:03:34 The nine alleged fraudsters carrying mainland China passports were discovered on the back of a local official's black Isuzu pickup truck at a checkpoint in Chiang Rai province on September 26.
2022-09-28 15:41:23

Footage shows the flames ravaging the vessels as firefighters hosed down the blaze in the coastal city Shantou in Guangdong on September 27.
2022-09-28 13:21:46 Shocked passengers saw the unknown substance oozing through the gaps in the hat rack inside an AirAsia Airbus A320 shortly after it departed Manila for Davao City on September 21.
2022-09-28 12:32:42 Several houses of worship in Nakhon Ratchasima province have begun treating the locals to vegetable dishes for the yearly celebration.
2022-09-27 17:11:19 Villagers in white, along with Ong Ear shrine president Chaopho Muen Ram, trekked to a forest in Trang province on September 25 to cut down a tall bamboo tree to be used as a 'Go Teng' pole for the ceremonies.
2022-09-27 17:09:46 Footage shows guests of varying ages battling through the crowd to receive their share of the feast from the enormous cauldron in Anyang City, Henan province on September 22.
2022-09-27 14:54:39

Devotees pray at the start of Vegetarian Festival in Bangkok, Thailand

The annual festival this year falls on September 25 to October 4, with flamboyant street processions - featuring performers committing self-mutilation to prove their devotion - making a return as pandemic curbs in the country have eased.
2022-09-26 17:46:36 The holidaymaker Claus Riese, 56, was filmed weaving across traffic while on the carjacked vehicle, with a mob of motorcycle-riding villagers pursuing him in the Buleleng Regency of Bali on Friday, September 23.
2022-09-26 14:39:47 The blast ripped through a Superette supermarket on the corner of Victoria Road and Plein Road in Woodstock, Cape Town. Debris was strewn across the street.
2022-09-24 13:59:34 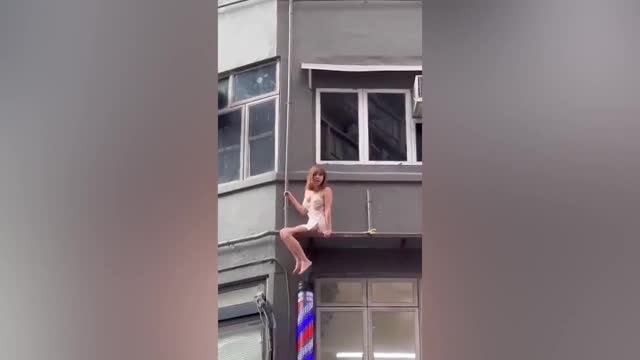 'Catman' burglar busted after breaking into lingerie store in Argentina Rude passenger has her SHOE thrown off the carriage in China

The lady was riding the subway train in Shenyang City, Liaoning province on September 21 and had reportedly taken off her shoes to relax.
2022-09-23 16:18:24